One of the most damning things New York has is the jury instruction on breath test refusals. It allows the judge to tell the jury they can INFER a consciousness of the defendant's guilt (of DWI) if they refused to take a chemical test of blood or breath. Coming from a judge as an instruction on the law is a horrible hurdle on refusal DWIs. In the recent DWI case, the police waited till after two hours to request a test.


That doesn't make a chemical test of blood or breath inadmissible at trial BUT the refusal ... 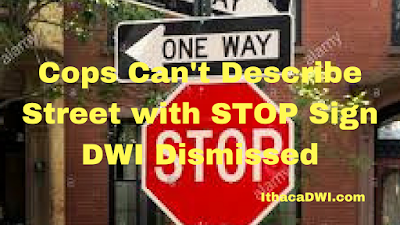 Police have to testify in DWI cases. You can not be tried based upon paperwork and police reports. They are hearsay and inadmissible. When attorneys challenge the stop of a car in a DWI the police have come to court and testify to WHY they stopped the car. In a recent New York DWI case that was successfully challenged the police officers could not sufficiently describe the location of a STOP sign.


Can comparing a police report to police testimony defeat a DWI?
Can even probable cause for going through a stop sign be challenged?

Why Cops are Mean On DWI Stops? 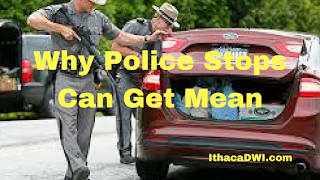 Sometimes we get the phone call that is irate and pissed off about how the police handled their DWI stop. With some police departments it is more common and with others less BUT DWI can bring out the worst in people's temperaments. We see two types of DWI stops that bring the most heat or hate.

Do the police have a legitimate right to be mad with some DWI arrests?

What can you do to make your police stop and/or arrest for anything better or at least civil?

Are Marijuana Per Se Laws Coming?


We are at a cross roads with marijuana in this country. Cannabis use is trending nationally both medically and recreationally. Laws are changing for it's use but we have multiple standards that define when and if someone can drive. We have active delta 9 THC laws, inactive metabolite THC laws, and then we have "per se" laws.

We only have one drug nationally that is defined with a number and that is alcohol at .08 BAC. The only reason all 50 states adopted that number was by the coercion of the government. If they wanted funds for their highways then they needed to implement .08 BAC.

Are we going to see a marijuana per se law nationally?
Can cannabis be quantified by a per se law?
Is it fair to lump marijuana impaired driving with drunk driving?

I saw the new movie Tully that stars Charlize Theron. The movie is set in a NY suburb. As a New York DWI defense attorney I was taken back by it's treatment of a DWI accident.

Do movies have to distort real life? Can Tully remain a good movie in spite of it's fantasy about law and order? Should the movie have given more weight or a better treatment of the DWI?

How Long is Too Long? 29 month DWI Case

A recent appellate decision on a New York DWI case has me scratching my head. In People v. Pena-Encarnacion, Case Number: 2014-736QCR, the defendant was first arraigned on the charges August 29, 2011 and the matter ended in 2013. This case was appealed and decided last week in 2018!

It started with a man alleged to gone through a steady red signal, and to have been DWI in Queens, NY. He was charged with two different DWIs, common law DWI and DWI per se, over .08 BAC. The case ended with a bench trial (judge trial) 29 months later, yes that's no typo, twenty-nine months later. Being found guilty of DWAI alcohol by the judge. The case went up on appeal.


New York State has a dirty little secret. We are one of ten states where prosecutors don't have to hand over the evidence they plan on using against you. Evidence proves cases. Discovery is what the evidence is called. It's not like they don't ever have to provide discovery. They can choose to wait and wait and wait, then the day right before trial you get a package. Without early disclosure defense attorneys are in the dark. This is unfair and unjust but it happens every day in courtrooms across the state.