We moved to lovely Ithaca, NY in 2006. Ithaca may have begun as a choice but it is also far more than a final destination for us. Moving here has led me to examine and evaluate. It has in a sense slowed us down. My wife and I take walks together. My four children have all attended Ithaca High School. Three have graduated in the years we have been living here (one more to go). I have watched the school go through changes physically as well as philosophically. The community has invested in the structure and growth of the school. The new architecture further mirrors and enhances the direction of the school's progress and growth.


I believe Ithaca "was and is" a good choice for my family. As much as many here complain about this or that we are privileged to have those that genuinely care.

Which leads me to the how and why of new speed limits in our school zones. As a criminal defense lawyer focusing on traffic violations, DWI, and car accident related  injuries I certainly don't want to live, walk, and have my children in a place where there are NO rules. But why do we have these rules? and why do rules (laws) have to change with time?

The front of Ithaca High School lies on Cayuga Street. Car accidents over the past years (on Cayuga Street) have led to recent changes in the speed limits around the High School being changed. I think it is a change long coming. Seeing people speeding in and around the school as kids are crossing the street has always been an issue. I believe that the new school zone speed limits should also be placed on the roads at the rear of the school as well. My wife and I have seen way too many people on the rush up Gun Hill Road (going up to Cornell) driving recklessly, especially with snow and icy conditions. 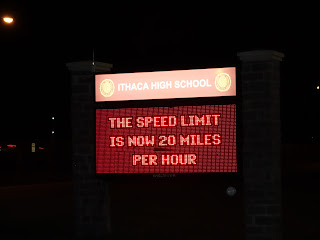 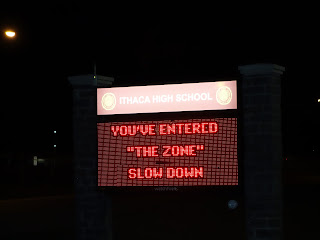 I think I can understand speeding on some of the main arteries (route 96, route 79, route 89, route 13) coming in and out of Ithaca easier than the little streets downtown. My opinion of this situation is shared by many prosecutors and Judges as well. Going 50 mph in a 20 mph school zone is not going to win you many friends. A word to wise in Upstate New York, when you see any kid/school zones slow way down. 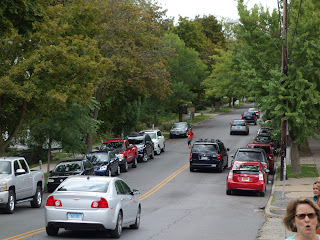 Doctor of Chiropractic
Attorney and Counselor at Law

http://www.ithacainjurylawyer.com
Posted by Unknown at 4:17 AM